skip to main | skip to sidebar

Making hajj increases one's faith in Allah and decreases the incidence of depending on anything other than Allah.
There is a new study out on Muslims. This one focuses on Muslims and the hajj. David Clingingsmith, Asim Ijaz Khwaja and Michael Kremer are authors of "Estimating the Impact of the Hajj: Religion and Tolerance in Islam's Global Gathering."
While most of the news articles referring to this study have focused on the data that supports the premise that hajj makes Muslims more tolerant of others, this article includes data about the hajjis religious practices after returning home.
Pilgrims are more observant of orthodox religious practice even five to eight months after returning from the hajj. They are 16 percent more likely to pray, 26 percent more likely to do so regularly in the mosque, and double their likelihood of non-obligatory fasting. Interestingly, however, pilgrims are less likely to believe and participate in localized religious practices, such as using amulets.
In other words, many Muslims increase their level of religious practice after returning home and at the same time give up reliance on things that cannot benefit them as adjuncts or aids (such as amulets) to depending on and trusting in Allah
Posted by Footsteps to Paradise at 4:25 PM No comments: 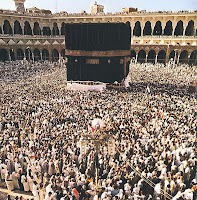 Everyone who wants to go to hajj should spend some time on the Hajj Ministry site of Saudia Arabia. The site includes all Saudia government regulations and deadlines for hajjis. It has historical, religious, and travel information. It also explains the 3 types of hajj and the requirements one must fulfill in each instance. The site as a FAQ sheet, and it has contact information.
It is impossible to stress enough how much preparation each hajji should make. If you think travel in the U.S. is tough for Muslims, try Saudi Customs. Anything they find in your luggage that doesn't look right is taken out and tossed into the trash, no questions asked. Anything that looks illegal will get you sent to jail immediately.
The customs officials have a tough job with an unimagineable flow of humanity with all of its colors and languages. They cannot take the time to listen to pleas of ignorance or extenuating circumstances. They are not about providing customer service. They are trying to process nearly 2 million people.
Go to the Hajj Ministry information website now and save yourself a lot of headaches later. For the Ministry statement on books and other materials click here. For the Ministry statement on food, drugs and alcohol click here.
Posted by Footsteps to Paradise at 12:46 PM No comments:

Impressions of the Kaaba

A unique, almost impressionistic response to seeing the Kaaba was written by Islam from inside.
My first encounter with the grand mosque was a slow recession backwards into time. As I entered through the mammoth doorway and walked across the cool marble floors I left behind the dissonance of congested traffic and the commotion and agitation of Mecca's busy streets and markets. Endless rows of pillars and high archways floated past as I made my way through vast, warmly hued halls, lined with row upon row of thick, yielding, richly textured rugs. The timbre of the colors and textures was overwhelming. I was reminded of a hike through an old growth forest in Canada, where towering tree trunks rose to make an arched canopy of intertwined branches and the forest floor was a soft, silencing carpet of fallen leaves.
and here:
I stood and watched the tawaf for a long time. The tawaf consists of walking around the Kaaba seven times. Each circuit begins with raising the right hand in a salute of acknowledgment towards the black stone (called the hajar-al-aswad) embedded in one corner of the Kaaba. The raising of the hand is a substitute for kissing this stone since it is almost impossible to get close enough to accomplish that - there is forever a tight knot of people around the stone, all pressing inward in an attempt to touch or kiss it. If you approach too close to this endlessly forming and reforming knot you are squeezed so forcefully that your feet leave the ground and you have no control over where you are carried.
Then, the gravitational presence of the Kaaba tugged at me and I was drawn into the tawaf. Immediately, I was caught in the press and flow of bodies. Heat and sweat engulfed me and the physical presence of the crowd of pilgrims pressing in around me became the direct focus of my concentration. I wiped at the rivulets that streamed off my forehead and walked forward swept along by the inundating flood of humanity in which I was immersed.
The crowd shifted and flowed around me - an organized chaos of particles they bumped along in a curved path around the Kaaba like electrons in orbit around a nucleus. Everyone was focused inwardly on their own individual recitations and concentrating on their own tawaf. In front of me an aged blind man, his pure white hair and beard glowing in the sun, leaned on a wooden staff as he performed his circuits unguided except by the sounds of the crowd and the movement of bodies around him. His free hand would rise occasionally, palm upwards in supplication as he would speak a prayer. What was it like to do this tawaf in darkness, with no visual cues, no images to process. Did he sense the looming presence of the Kaaba by his side, was he able to turn his consciousness completely inward without the incredible spectacle of the tawaf to distract him? I closed my eyes and for a few steps walked blind.
A swirling eddy of sounds came and went as people passed by or as I passed by them. Some traveled in groups loudly reciting quran'ic verses in unison, some whispered to themselves - others moved in silence and I knew their presence only by their touch as they brushed past. The sounds ebbed and flowed in my consciousness as if I was a leaf floating on a river of prayers - currents and eddies of supplications tugging my consciousness this way and that.

Read the full post here.
Posted by Footsteps to Paradise at 6:19 PM No comments:

Hajj is hard on everybody’s body. If you have health problems, work closely with your doctor to try to be in the best health possible and try to have as many contingencies covered as possible.

· Divide your medications and testing supplies into two bags and store them in two different suitcases or bags. One may be lost or stolen.

· Make sure you have extra of all your medications. One hajj group experienced unexpected travel delays that got them back to the U.S. about 10 days later than planned.

· Get a health bracelet listing your medical conditions and all of your environmental, food and drug allergies.

· If you are diabetic, make sure you have tablets, even if they don’t work quite as well on you. You may not have refrigeration problems for your regular insulin, but you have to be prepared with something that will sustain you until the problem can be resolved.

· Make sure you carry on your person at all times any emergency medications such as nitroglycerin for your heart or an epi pen for life-threatening allergies. Do not expect that others will have the time to search for your emergency medications through luggage that has been moved and re-packed numerous times already. Do not assume you will only get sick when you are at your hotel and your luggage is easily accessible.

· If there are any specific treatments or tests you need to receive, make sure you carry a letter from your doctor stating what the procedures are. Make sure it stays dry and with you at all times.

· If you are paraplegic and have a special cushion for your wheelchair, try to bring an extra. Yes, one sister’s cushion was stolen right out of her chair when she was being transferred to another seat.

Finally, there is one fact that you and those traveling with you should understand and be prepared for. If you become ill, say, in New York when everyone is boarding the plane for Jeddah or in Mina when everyone is leaving to go the Arafah—they have to go. That is hajj. They cannot stay with you. It would be a difficult test from Allah to leave someone behind or to be left behind in the care of strangers, but hajj is exactly that kind of test. Trust in Allah. All of us have to trust in Allah.

Posted by Footsteps to Paradise at 1:50 PM No comments:

Hajj for All Ages

Posted by Footsteps to Paradise at 4:28 PM No comments:

Make Hajj As If You Know You're Dying

Part of the preparation for hajj is to think of it as the last thing one may ever do in this life. There is no time left to hold grudges, to fill sorry for oneself, to complain about things undone or whine about how much is left to do. Preparing for hajj means reflecting on one's life, making amends where possible. It is time to begin to ask for forgiveness and to express gratitude to Allah.

Imagine having cancer and knowing it has metastasised, or spread, before you make hajj. This blog copies the letter of a Muslimah who had already had breast and brain surgery. Allah blessed her to remain symptom-free (of the end stages) until she left the U.S. on the first leg of her journey to Mecca. Her letter is full of such joy! She died shortly after returning home, may Allah grant her Paradise.

Posted by Footsteps to Paradise at 3:41 PM No comments:

A Small Collection of Stones
Release in a Muslim’s moment
The joy and anger
Of glorious retaliation
Against weakness and sin
Relief at the jamarat
Is in a small collection of stones
Missiles against the Shaitiin
Whistling through the air
UmmUmar © 2007
Courtesy of muslimwritings
Posted by Footsteps to Paradise at 3:38 PM 1 comment:

Talbiyah
Labayk Allahuma Labayk
Labayk La Shareeka Laka Labayk
Innal Hamda Wannimata laka
walmulk Laa Shareeka Lak
Translation:
"I respond to Your call my Lord
I respond to You, there is no diety save You.
All praise, grace and dominion belong to You.
You have no partners."
Posted by Footsteps to Paradise at 3:35 PM No comments:

Patience, Charity and the True Story of Habib Miyan 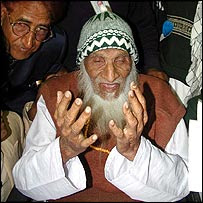 It began as a human interest story. Many people read it and simply moved on to the next item. Yet it is a story of charity because for a few, Habib Miyan became an opportunity from Allah to seek His Blessings.

Finally, it is a story of Allah's reward for Habib Miyan, whose prayer to make hajj was finally fulfilled. Allah knows best the reward He has in store for the Muslims who made contributed money and any other manner of assistance to make this story--this lesson for all of us--possible.

Follow the story here, here, and here. The photo gallery is here.

Posted by Footsteps to Paradise at 3:33 PM No comments:

Salaam Alaikum and Welcome to Footsteps to Hajj

This blog is dedicated exclusively to topics related to Hajj. We will try to supply you with helpful information as well as stories, poems, and videos. That which is helpful comes from Allah. Any mistakes are our own; may Allah forgive us. Please keep your comments on topic and respectful of others.